I got a leaflet in the post the other day from Pizza Hut. It said “To celebrate the release of the new Superman movie Man of Steel, we’ve released a new big box meal!” Below was a picture of a square pizza in a box with some dips and a few sides. In fact, I managed to find a picture of it on the internet, and it looks like this: 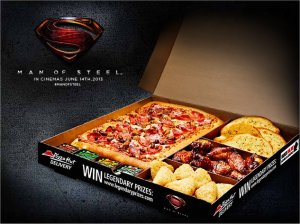 Look at the picture for a few moments. As you can see, it’s a square pizza in a box with some dips and a few sides. It certainly looks tasty in a kind of “I’m hammered and don’t care what I eat” sort of way, but what exactly does it have to do with Man of Steel? Is the pizza kryptonite flavour? No. Have they tried to recreate Superman’s cape and insignia with the toppings? No. So what was the connection? Then my eyes drifted towards the bottom of the leaflet and I saw it – the sentence that had clearly been dreamt up by one of Pizza Hut’s marketeers to tenuously connect the pizza with the movie. It read:

That’s the best they could come up with? Did someone really think “what a minute – Superman is heroic, and a meal for 2-3 people is heroic! It’s the common denominator we’ve needed to tie this whole campaign together!” After reading the leaflet, I looked up the definition of the word “heroic” on the internet. It said:

Adjective: Having the characteristics of a hero or heroine; very brave.

Noun: Behavior or talk that is bold or dramatic.

Other uses: Can also be used to describe a meal for 2-3 people.

I guess I stand corrected. So it appears advertisers can now insert completely random words into a sentence to link two unrelated brands together. For instance, if another Star Trek Movie comes out, maybe Pizza Hut should do another big box meal and say “It’s an intergalactic meal for 2-3 people!” Of course, they’d have to change the meal about a bit, maybe replacing the wedges with some fries or something. Otherwise people will just realise it’s the same meal repackaged in a different box.

If Time Rep is ever made into a film, I hope KFC launch a big box meal to celebrate the release. It would be called the “TIME REP meal” and would be a burger, with two chicken wings, fries, and a coke. And beans. And it would look like this: