Got married, went to Hawaii, the usual

Sorry I’ve been away for so long – Lucy and I got married on the 12th October, and two days after that I took her on a surprise honeymoon to Hawaii for 8 days, which she was very happy about. Whilst we were away, I switched my phone off, didn’t check any e-mails, didn’t look at how the books were doing, in fact we completely cut ourselves off from the outside world, and it was magical. Hawaii is a wonderful place, and it was by far the best holiday we’ve ever been on. We only got back yesterday after a 24-hour journey, and after catching up on what happened in The Great British Bake Off (the first priority once we got home), we both went to bed and slept for 15 hours.

In case you’re interested, here are some holiday snaps of me looking very English and not knowing how I should be dressed in a tropical climate: 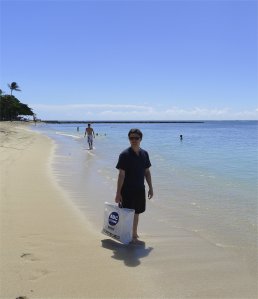 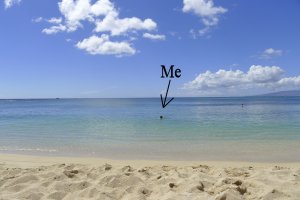 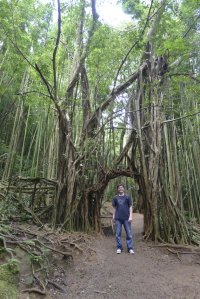 So here are the top things I learnt from travelling to Hawaii:

1)      Walking along the beach in your bare feet is wonderful, until you realise it’s midday and the sand is boiling hot.

4)      A 1 litre bottle of Mountain Dew has 120g of sugar in it, which I only realised after I drank the whole thing and went on a sugar-high rampage.

5)      If you have pale skin and look awkward and English, it’s impossible not to look like an awkward, pale-skinned English tourist.

6)      Applying factor 110 suntan lotion every two hours still isn’t enough to stop you from burning in the midday sun.

7)      The are at least 55 ABC stores within a one mile radius of where you are standing, and they all sell exactly the same thing.

8)      Everyone in Hawaii is ridiculously friendly and chilled out, but then I suppose you would be if you lived somewhere that beautiful.

9)      The portion sizes in Red Lobster restaurants are massive.

10)  I can handle about ten bottles of Hawaiian beer before attempting to take my shorts off over my head.

11)  You can’t take your shorts off over your head.

12)  Everyone on the coast stops to watch the sunset, and even gives it a round of applause. Well done Sun!

13)  My feet do not agree with flip flops that have the bit that goes between the big toe and the toe next to it.

14)  The buffet breakfast at the Trump International Hotel can sustain a person for two days.

15)  I’m useless at working out which American coins are which.

16)  You get asked for ID when you order a beer. It makes you feel young again until you realise it’s the law to ask everyone for ID no matter how old they look.

17)  There are more than five stars in the sky at night, which is all you can see in London.

19)  My book isn’t sold in any bookshop in Hawaii. And I really looked hard.

20)  Swimming in the sea and then seeing a massive sea turtle next to you is awe-inspiring. And they nibble things.

21)  Luggage does its own thing. Like staying behind at an airport you’re flying home from.

So there you have it. We really had a fabulous time, and I strongly recommend Hawaii if you’re thinking of going somewhere to chill out and relax. However, if you want to go somewhere to get all angry and stressed out, don’t bother going, because it’s impossible.